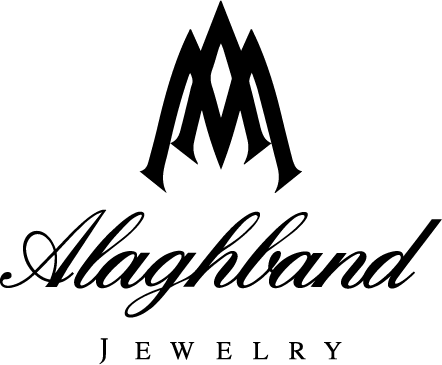 This group includes all those stones that have been traditionally represented in the trade. The name diamond refers to its hardness (Greek- Adamas, the unconquerable). There is nothing comparable to it in hardness. its cutting resistance is 140 times greater than that of ruby and sapphire, the gemstone next in hardness after diamond. However the hardness of a diamond is different in the individual crystal directions. This allows one to cut diamond with diamond and diamond powder. Because of the perfect cleavage, care must be taken not to accidently bang againts an edge of a diamond and also when setting it. Its very strong luster sometimes enables the experienced eye to differentiate between a diamond and its imitations.

Diamond is generally insensitive to chemical reactions. High tempertures, on the hand, can induce etchings on the facets. Therefore special care must be taken during soldering!

Diamonds  are found in primary and secondary deposits. Until 1871 diamonds were only washed out of diamondiferous placers. By chance a primary deposit was discovered in South Africa: volcanic pipes filled with diamond-bearing rock, kimberlite (more rarely lamproite, a greenish-gray speckled mafic rock).

Diamond is formed at great depth (as much as 150-300 km) at very high temperatures and high pressures. By particular kind of volcanic eruption, they came to the surface of the earth or close to it with rising magma. With gradual erosion, the original volcanic cone was removed, exposing the kimberlite pipes.

Up to the 18th century, some diamonds came from Borneo, but most from India. In 1725 the first diamonds were found in the South American continent in Minas Gerais in Brazil. In 1843 a brown-black carbonado was discovered in Bahia; this is a microcrystalline aggregate that is very tough and therefore in demand for industry.

Brazil was superseded by South Africa, which until about 1970 had an unsurpassed position as to production and trade. The first diamond find in 1866 was in the region near the source of the Orange River. At first only the alluvial deposits were worked. In the meantime many kimberlite pipes have been discovered.

The most famous and noteworthy pipe of South Africa, the Kimberley mine, was worked from 1871 to 1908 without any machinery. This produced what was once the largest man-made hole, the so-called Big Hole: the surface hole has a diameter of 1510ft (460 m), and the depth is 3510 ft (1070 m). Today it is half-filled with water. Altogether 14.5 million carats (2900 kg or about three tons) of diamonds were found there. after having been worked for a short time underground, the mine was discontinued in 1914, because it proved not economically feasible. Other South Africfan pipe mines changed from open pit to underground mining early on. Ashaft is sunk next to the kimberlite pipe, and then the diamond-bearing rock is mined along transverse levels.There are important alluvial deposits in Namibia at the western edgeof the desert Namib.

In the valuation of faceted diamonds, color, clarity, cut and carat are taken into consideration. These four c’s decide that value of a diamond;

The color evaluation of most gem_quality diamonds is based on the absence of color.

A chemically pure and structurally perfect diamond has no hue, and consequently, a higher value.The GIA Color Grading System measures the degree of colorlessness by comparing a stone, under controlled lighting and precise viewing conditions, to masterstones of established color value. Many of these color distinctions are so subtle that they are invisible to the untrained eye; however, these distinctions make a very big difference in diamond quality and specialy price.

Natural diamonds are the result of carbon exposed to tremendous heat and pressure deep in the earth. Evaluating diamond clarity involves determining the number, size,nature, position and color of these characteristics, as well as how these affect the overall appearance of the stone. While no diamond is perfectly pure, the closer with comes, the higher its value.

Many inclusions and blemishes are too tiny to be seen by anyone other than a trained diamond grader. To the naked eye, a VS1 and an SI2 diamond may look exactly the same, but these diamonds are quite different in terms of overall quality.

Diamonds are beautiful for their ability to transmit light and sparkle so intensely.

The quality of cut is crucial to the diamond’s final beauty and value. Brightness, Fire and Scintillation, consider the diamonds overall face-up appearance.

Brightness: Internal and external white light reflected from a diamond.

Fire: The scattering of white light into all the colors of the rainbow.

Scintillation: The sparkle a diamond produces, and the pattern of light and dark areas caused by reflections within the diamond.

The measurement of how much a diamond weighs.

A metric ” carat ” is defined as 200 milligrams. Each carat can be subdivided into 100 points. The weight of a diamond below one caret can also be described by its points alone.

Diamond price increases with carat weight, beacuse larger diamonds are more rare and more desirable. But two diamonds of equal carat weight can have very different values depending on three other factors within the 4C’s: clarity, color and cut.